Ashley Jensen is an actress who provided the voice of Downy McDuck in the DuckTales reboot.

While she has done voice work in films like How to Train Your Dragon and Arthur Christmas, Jensen has extensive television work from shows such as May to December, City Central, Ugly Betty, Accidentally on Purpose, Extras and Agatha Raisin. 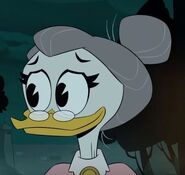 Downy McDuck
(1 episode)
Add a photo to this gallery

Retrieved from "https://ducktales.fandom.com/wiki/Ashley_Jensen?oldid=57493"
Community content is available under CC-BY-SA unless otherwise noted.