"Don't Give Up the Ship"

The Beagle Boys are a group of criminals frequently hired by Flintheart Glomgold or Magica De Spell to steal Scrooge McDuck's fortune or Number One Dime. Sometimes, they break out of jail of their own accord and attempt to steal Scrooge's fortune alone. They are also brothers.

The Beagle Boys were given names and different personalities. The usual character combination is Big Time, Burger and either Bouncer or Baggy (sometimes both of them). Babyface, Bugle and Bankjob appear throghout the first season, either replacing one of the others in the main group or appearing as their own seperate trio.

Their leader is usually Bigtime or Bankjob, although when their mother, Ma Beagle, appears she allways take charge, and is often the only Beagle to escape successfully.

In addition to the main branch of the family, there are several Beagle Boys who only appear in one episode, and even more who only make a non-speaking appearance, or are just mentioned in the dialogue. 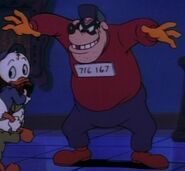 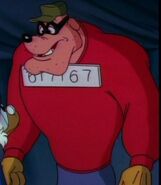 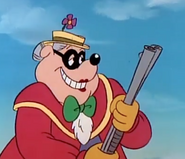 Ma Beagle
Add a photo to this gallery 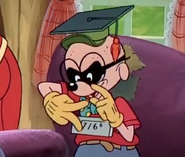 The Canadian Beagle Boys
Add a photo to this gallery

Retrieved from "https://ducktales.fandom.com/wiki/Beagle_Boys_(1987)?oldid=54548"
Community content is available under CC-BY-SA unless otherwise noted.