Bill Fagerbakke is an actor who plays the Ghost of Christmas Present in the 2017 DuckTales episode "Last Christmas!."

He has been in live action media too such as the role of "Dauber" Dybinski on Coach. 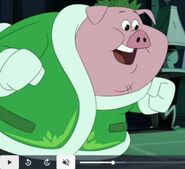 Retrieved from "https://ducktales.fandom.com/wiki/Bill_Fagerbakke?oldid=57475"
Community content is available under CC-BY-SA unless otherwise noted.