Catherine Tate is a voice actress who plays the role of the Magica De Spell in the DuckTales reboot.

Tate is perhaps best known for her eponymous BBC sketch comedy The Catherine Tate Show, for which she was nominated for an International Emmy Award and seven BAFTAs. She is a former cast member of Doctor Who, on which she previously starred as the companion Donna Noble alongside David Tennant as the Doctor. She also had a recurring and later regular role as Nellie Bertam on the final few seasons of the US version of The Office.

Tate is also a respected actor of the stage, having performed in productions of Much Ado About Nothing as Beatrice (with David Tennant as Benedick) and failed presidential assassin Sarah Jane Moore in the Menier Chocolate Factory's production Assassins. 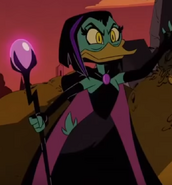 Magica De Spell
(6 episodes)
Add a photo to this gallery

Retrieved from "https://ducktales.fandom.com/wiki/Catherine_Tate?oldid=50030"
Community content is available under CC-BY-SA unless otherwise noted.