Chris Diamantopoulos is a Greek Canadian actor who plays the roles of Storkules, Melon, the Mythical Goat, and Drake Mallard in the 2017 DuckTales series.

His acting credits also include being the voice of Mickey Mouse in the 2013-present Mickey Mouse shorts, whereas the role is otherwise played by Bret Iwan. His other voice acting credits include Robot Chicken, American Dad, Family Guy, Skylanders Academy, and Go Away, Unicorn!.

He has also acted in live action television with shows like Charmed, Nip/Tuck, The Sopranos, 24, Silicon Valley, Hannibal, and Arrested Development. 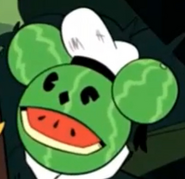 Mythical Goat (1 episode)
Add a photo to this gallery

Retrieved from "https://ducktales.fandom.com/wiki/Chris_Diamantopoulos?oldid=63578"
Community content is available under CC-BY-SA unless otherwise noted.