Corey Burton is an American voice actor. In a career spanning over fives decades, Burton is well-known for extensive work for Disney providing sound-like performances of characters from the companies past works as well as original characters.

Burton provided the voices of Mr. Wimpleman and various minor characters in the original DuckTales. He appeared in 3 of the 100 episodes of the series.

One of the character he voiced was Ludwig Von Drake, and in 2017 he returned to voice the new version on a recurring basis in the DuckTales reboot, while also providing the voice of Corvus Von Drake and The Liquidator. He is one of eight actors to appear on both shows – the others being Tony Anselmo, Michael Bell, Jim Cummings, Rob Paulsen, Russi Taylor, Tress MacNeille and Keone Young. 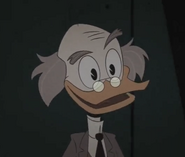 Liquidator
(1 episode)
Add a photo to this gallery

Retrieved from "https://ducktales.fandom.com/wiki/Corey_Burton?oldid=64874"
Community content is available under CC-BY-SA unless otherwise noted.