David Kaye is Canadian voice actor who voices Duckworth in the 2017 DuckTales series. He is known for being the English dub voice of Treize Khushrenada in Mobile Suit Gundam Wing as well as dubbing other anime like Transformers: Cybertron, Ghost in the Shell: Stand Alone Comple and Inuyasha.

Kaye has also narrated movie trailers and network promos for ABC, Fox, The CW, National Geographic, TLC, FX and others. 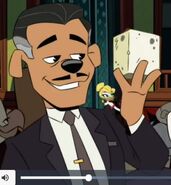 Retrieved from "https://ducktales.fandom.com/wiki/David_Kaye?oldid=60593"
Community content is available under CC-BY-SA unless otherwise noted.