David Tennant is a Scottish actor who provides the voice of Scrooge McDuck in the DuckTales reboot. He is known for various other television and film roles, including:

Tennant is also a highly respected Shakespearean actor, having performed the title roles in the critically acclaimed productions of Hamlet and Richard II at the Royal Shakespeare Company, as well as playing Benedick in a production of Much Ado About Nothing alongside his Ducktales and Doctor Who co-star, Catherine Tate. 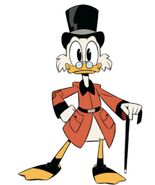 Scrooge McDuck
(48 episodes)
Add a photo to this gallery

Retrieved from "https://ducktales.fandom.com/wiki/David_Tennant?oldid=77013"
Community content is available under CC-BY-SA unless otherwise noted.