Stereo
Mono (The Treasure of the Golden Suns)

DuckTales is an American animated television series produced by Walt Disney Television Animation, and based on Uncle Scrooge and other comic books created by Carl Barks. The show premiered on September 18, 1987, and lasted for a total of 100 episodes, with its finale airing on November 28, 1990.

The first productions of Walt Disney Company's Television Animation subsidiary were released in 1985 – The Wuzzles and Adventures of the Gummi Bears. Both series starred all-new characters, but ideas for a show based on the Ducks of the studio's animated shorts and comics were already tossed around.

Production on DuckTales began during the Summer of 1986. Unlike Disney's earlier cartoons, which aired on network television's Saturday morning schedule, Disney decided to have DuckTales premiere in syndication on weekday afternoons, which meant an initial order of 65 episodes (13 weeks á 5 days).

The idea was to build on the quality of some of the best Duck comics available - i.e. the ones created by Carl Barks, creator of Scrooge McDuck – while also giving them a modern flavor. Consequently, four of the five earliest episodes to be produced were based on stories by Barks, although with new characters added, most notably pilot Launchpad McQuack, a character originally pitched by creative duo Ken Koonce and David Wiemers, who would end up being the shows most frequent writers.

The ambition of the Disney shows were higher than for cartoons in general, and in order to afford higher quality, the animation production were outsourced – to TMS Entertainment in Japan and Wang Film Productions in Taiwan. Other studios and animators also tried out, including renowed Italian Disney comics creator Romano Scarpa. 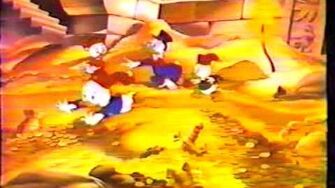 Much of the show's basics was developed by Jymn Magon, who co-wrote some of the first season's pivotal episodes, including the 5-part serial The Treasure of the Golden Suns, which, although not the first produced, was written as a pilot and introduction to the show's setting and characters.

Alongside the scripts, animation, and characters, Mark Mueller's DuckTales Theme, as sung by Jeff Pescetto, has also been credited with increasing the show's popularity.

Each episode of the first season ended up costing $275.000, but the investment turned out successful; the show was aired in 93% of the United States, and ended up as the highest rated animated show in 1987.

Another 35 episodes followed, as well as a feature film, a big output of comics, and picture books and Read-Alongs. In addition it also spawned the highly successfull syndicated daily Disney Afternoon television block, and in 1990 it was one of several animated series to crossover in the "Cartoon All-Stars To The Rescue" special. The show also enjoys many more references in other media.

The show features the adventures of Scrooge McDuck and Huey, Dewey, and Louie. The nephews, who were originally living with their uncle Donald Duck, are left in Scrooge's care when the former joins the navy. Though Scrooge is the richest duck in the world, he constantly tries to find ways to increase his wealth, and several episodes involve protecting his wealth from villains who want to rob Scrooge's famous Money Bin.

Prominent recurring antagonists in the show include the Beagle Boys and devious witch Magica De Spell, as well as Scrooge's arch-nemesis, Flintheart Glomgold. A few of the stories also surround Scrooge's "Number One Dime", Scrooge's original inspiration and most valued possession.

Although Scrooge and his nephews are the show's main stars, some episodes focused on other characters like daring pilot Launchpad McQuack, or genious inventor Gyro Gearloose, while Duckworth the Butler, nanny/housekeeper Mrs.Beakley and her lovable granddaughter Webby, and good-spirited neighbor kid Doofus round out the first season's central characters.

The show's second season saw the addition of characters Fenton Crackshell/Gizmoduck and Bubba Duck, originally pitched as "Roboduck" and "Bubbaduck" by Tad Stones. Along with Bubba and Gizmoduck came stories that generally shifted away from the globetrotting plots of the first season, and revolved primarily in the contemporary setting of Duckburg. Episodes would feature either Bubba or Fenton but rarely both.

The 1987 series does not separate main cast/characters from guest cast or supporting characters. The following list include cast to appear in at least two episodes. Every recurring character is also included.

During the 1980s and 1990s, several VHS cassettes with episodes of the show was released, both in and outside the US.

During the 2000s the complete series has been released in a line of four DVD sets (Region 1).

Main article: DuckTales the Movie: Treasure of the Lost Lamp

A feature film, Treasure of the Lost Lamp, was released in cinemas in 1990, between season 3 and season 4. Plans to produce more movies were scrapped, due to it underperforming.

Comics featuring the DuckTales characters werer produced during the 1980s and 1990s, in the US as well as in Brazil and several European countries. In 2011 it enjoyed a short-lived revival, through American publisher Boom! Studios.

Videogames based on the DuckTales series has been released for several consoles.

Picture books were published primary during the show's original run, 1987-1990, with an additional book released in 1997.

The series was originally intended for Donald Duck to be the show's main protagonist. However, developers felt that Donald was not an adventure character, rather a comic book and sitcom character. Additionally, an edict from Disney's then CEO, Michael Eisner, forbade the use of Donald Duck and other Golden Age characters. However, Donald was allowed to make guest appearances throughout the show. Shortly after DuckTales 1987 concluded, the edict was lifted, allowing for other Disney Afternoon shows to regularly use Golden Age characters.