DuckTales 2 (ダックテイルズ2 Dakku Teiruzu 2) is the sequel to DuckTales. It is a platform game based on DuckTales. It was first released on the Nintendo Entertainment System, and was ported to the Nintendo Game Boy at the end of the year in America and Japan only. 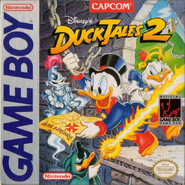 Game Boy Box
Add a photo to this gallery

Retrieved from "https://ducktales.fandom.com/wiki/DuckTales_2?oldid=73204"
Community content is available under CC-BY-SA unless otherwise noted.