Eric Bauza is a voice actor who plays the roles of all the Beagle Boys in the DuckTales reboot. Prior to that, he voiced Gizmoduck in the videogame "DuckTales Remastered", due to the death of Hamilton Camp.

He is also known for various other television and film roles such as The Fairly OddParents, El Tigre: The Adventures of Manny Rivera, Gravity Falls, Teenage Mutant Ninja Turtles, Unikitty!, The Book of Life, The SpongeBob Movie: Sponge Out of Water and Smurfs: The Lost Village. 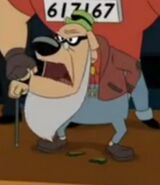 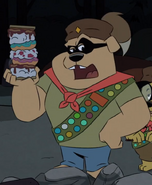 Bully Beagle
(1 episode)
Add a photo to this gallery

Retrieved from "https://ducktales.fandom.com/wiki/Eric_Bauza?oldid=64493"
Community content is available under CC-BY-SA unless otherwise noted.