Fred Tatasciore is an actor who provides additional character voices for the 2017 DuckTales series, including the Red Terra-firmian, Charybdis, Ligeia, and others.

Tatasciore has various secondary characters in animated media. In video games, he is known for voicing Saren Arterius in the critically acclaimed Mass Effect series, Damon Baird in the Gears of War series, Zeratul from StarCraft II: Wings of Liberty and Nikolai Belinski in the Call of Duty franchise.

In movies, voiced additional characters in 9, The Boxtrolls, Kung Fu Panda 2, Frozen, Tangled, Batman: Under the Red Hood, and Wreck it Ralph. 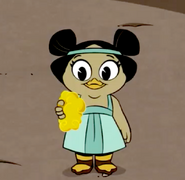 Gyropuddlians
(1 episode)
Add a photo to this gallery

Retrieved from "https://ducktales.fandom.com/wiki/Fred_Tatasciore?oldid=53630"
Community content is available under CC-BY-SA unless otherwise noted.