Graham McTavish is a Scottish voice actor who plays the role of Fergus McDuck in the DuckTales reboot. He is also known for various other television and film roles, including: Dwalin the Dwarf in The Hobbit film trilogy, Vlad Dracula Tepes in Castlevania, and The Saint of Killers in Preacher and Loki in various animated media from Marvel Comics.

His others film credits include Lara Croft Tomb Raider: The Cradle of Life, Aquaman, The Wicker Tree, Colombiana and Creed. His television and voice credits include Wolverine and the X-Men, Outlander, Teenage Mutant Ninja Turtles and Lucifer. 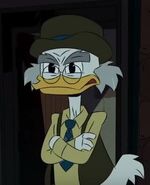 Fergus McDuck
(1 episode)
Add a photo to this gallery

Retrieved from "https://ducktales.fandom.com/wiki/Graham_McTavish?oldid=57049"
Community content is available under CC-BY-SA unless otherwise noted.