Jason Mantzoukas is an American actor, comedian, writer, and podcaster who plays Steelbeak in DuckTales.

He has appeared in movies like Baby Mama, The Dictator, Neighbors and The Disaster Artist as well as television shows like The Good Place, Parks and Recreation, Brooklyn Nine-Nine, No Activity, Comedy Bang! Bang!, Enlightened and The League Rafi where he was also a writer.

Also a voice actor, he has been a part of animated productions like Bob's Burgers, Regular Show, We Bare Bears, American Dad! and Big Mouth as Jay Bilzerian. 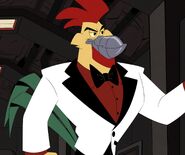 Steelbeak
(2 episodes)
Add a photo to this gallery

Retrieved from "https://ducktales.fandom.com/wiki/Jason_Mantzoukas?oldid=86903"
Community content is available under CC-BY-SA unless otherwise noted.