View source
watch 02:56
Doctor Strange in The Multiverse o Madness - The Loop
Do you like this video?
Play Sound

Gerber provided the voices of Mrs. Beakley, Webra Walters, Glittering Goldie, Lady de Lardo, Gloria Swansong, Buffy Parvenu, Mrs. Featherby, Mrs. Quackenbush and various minor characters in the original DuckTales. She appeared in 44 of the 100 episodes of the series, and she also voiced Mrs. Beakley in "DuckTales the Movie: Treasure of the Lost Lamp". 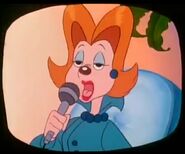 Gerber was active as a voice actress from the late 1950s to 2003, including notable roles like Mrs. Rich on "Ri¢hie Ri¢h" and Irma Boyle on "Wait Till Your Father Gets Home".