John Hodgman (born June 3, 1971) is an American author, actor, and humorist who plays John D. Rockerduck in the Ducktales reboot.

In addition to his published written works, such as The Areas of My Expertise, More Information Than You Require, and That Is All, he is known for his personification of a PC in contrast to Justin Long's personification of a Mac in Apple's "Get a Mac" advertising campaign, and for his work as a contributor on Comedy Central's The Daily Show with Jon Stewart. 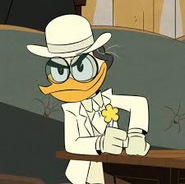 John D. Rockerduck
(1 episode)
Add a photo to this gallery

Retrieved from "https://ducktales.fandom.com/wiki/John_Hodgman?oldid=57489"
Community content is available under CC-BY-SA unless otherwise noted.