Marc Evan Jackson is an American comedian and actor who provides the voices of Bentley and Bradford Buzzard in DuckTales.

Jackson is best known for his role as Sparks Nevada in the popular podcast The Thrilling Adventure Hour (alongside Paul F. Tompkins). He is also known for his recurring roles as Kevin Cozner on Brooklyn Nine-Nine and Shawn on The Good Place (which stars Jameela Jamil). 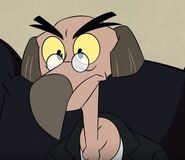 Bentley Buzzard
(1 episode)
Add a photo to this gallery

Retrieved from "https://ducktales.fandom.com/wiki/Marc_Evan_Jackson?oldid=50241"
Community content is available under CC-BY-SA unless otherwise noted.