Robin Atkin Downes is an British voice actor who plays the role of the Falcon Graves in the DuckTales reboot.

Downes' acting credits span from film and television to video games. He has lent his voice to films like How to Train Your Dragon, The Conjuring 2, Batman v Superman: Dawn of Justice, Batman: The Killing Joke and Frozen II. In television, his credits include Star Wars: The Clone Wars, Thundercats, Regular Show, Sofia the First, Voltron: Legendary Defender and Avatar: The Last Airbender. 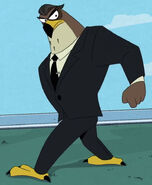 Falcon Graves
(2 episode)
Add a photo to this gallery

Retrieved from "https://ducktales.fandom.com/wiki/Robin_Atkin_Downes?oldid=60622"
Community content is available under CC-BY-SA unless otherwise noted.