Tara Platt is an actress who plays the roles of Mrs. Drake and a Junior Woodchuck in the DuckTales reboot episode Day of the Only Child! She is married to actor Yuri Lowenthal, who voiced Mr. Drake in the same episode.

Platt has provided voices for dozens of English language versions of Japanese anime productions such as Naruto, Rave Master, Sailor Moon, Bleach, and Tiger & Bunny. She has provided her voice to many video games as well such as the Tekken series, Persona 3 and Fire Emblem: Three Houses. 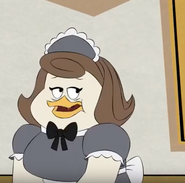 Mrs. Drake
(2 episodes)
Add a photo to this gallery

Retrieved from "https://ducktales.fandom.com/wiki/Tara_Platt?oldid=57015"
Community content is available under CC-BY-SA unless otherwise noted.