Tara Strong is a voice actress who appears as Briar in "The Missing Links of Moorshire!" Her extensive acting credits include playing Twilight Sparkle in My Little Pony: Friendship is Magic, which also stars Andrea Libman, the voice of Bramble.

Like Libman, she has an extensive voice acting career. Her most famous characters being Timmy Turner from The Fairly OddParents, Raven from Teen Titans and Teen Titans GO!, Bubbles from The Powerpuff Girls, and Terrence from Fosters Home for Imaginary Friends. She has appeared in shows like X-Men, The News Batman Adventures, Rugrats, Samurai Jack, Pepper Ann, and Ben 10. 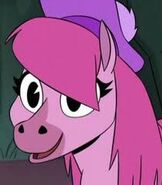 Briar
(1 episode)
Add a photo to this gallery

Retrieved from "https://ducktales.fandom.com/wiki/Tara_Strong?oldid=53626"
Community content is available under CC-BY-SA unless otherwise noted.