Terence Sean "Terry" McGovern is an American voice actor, television broadcaster, radio personality, and acting instructor who provided the voice of Launchpad McQuack and several other characters from the original DuckTales.

McGovern provided the voices of Launchpad McQuack, Babyface Beagle, Screamin' Sky McFly and various minor characters in the original DuckTales. Together with Chuck McCann and Frank Welker, he was the third most frequent appearing actor in the series, appearing in 56 of its 100 episodes, and he also voiced Launchpad in DuckTales the Movie: Treasure of the Lost Lamp and DuckTales Remastered. 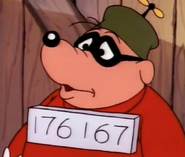 McGovern later reprised the role of Launchpad in the Disney Afternoon series "Darkwing Duck" and in "Raw Toonage".